The series of photographies were created mainly in the period from July to December 2013, and after.

They are reflection of my connection with causal-elemental nature, and my search for active primal places of the space. In the past Venetian civilisation was already tuned with these places. Photos I see as records/stories, which were revealed to me. They are stories of life pulse, which is not explicitly seen. Through the process of the search-tuning-taking photos I became conscious of new secrets of (my) world. I’m passing them forward.

For me, Dragon** of the  is first of all water dragon…Lifewater, Airwater, Firewater and Earthwater are for pervading elements of the dragon being. Dragon, with whom I connected, I could identify on certain placed in the Lagoon: on Torchello, Giudecca, San Lazzaro, San Servolo, Burano, San Francesco del Deserto, these water vastnesses, where I stayed for longer.

Venice is the place, where I get married with the water. First days of July 2013, I again sailed back into Lagoon. From 1978 onward, in the period of more than 30 years, I spent all together more than one year living in Venice. In this time, I created photographies for four books of Marko Pogačnik, for three journalistic projects and for two art projects. 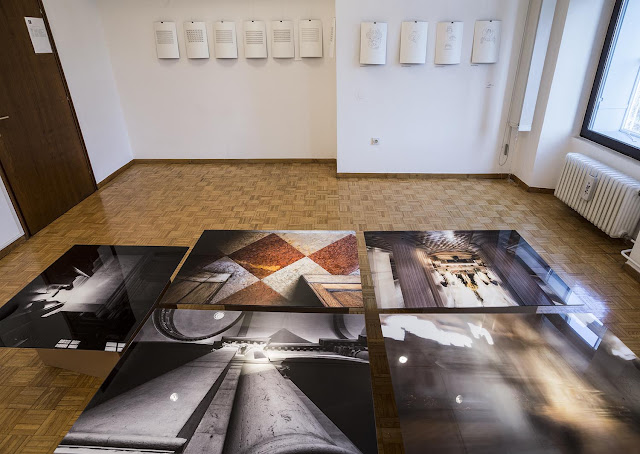 from 26 of January 2nd part exhibition was opened in Italian Institute for culture in Slovenia, Ljubljana, Breg 12. In the gallery of the Institute, photographies of Bojan Brecelj are complemented with 32 drawings of Marko Pogačnik: The sound of Church of San Giorgio Maggiore and other drawings of Venice.

In the deep past of Gaia’s evolution, “sparks“, asteroids … certain information from distant stars and galaxies … sparked the evolution where dragon forces developed as a living conscious form of Gaia. Venice is the place where I get married with the water. From 1978 onward, in the period of more than 30 years, I spent more than one year all together living in Venice. During this time, I created photos for four books by Marko Pogačnik, three journalistic projects and two art projects. In the first days of July 2013, I sailed back into the Lagoon … In my world, water is the essence of life or life itself – forming, transforming and sustaining structure which holds information. The rhythm, the processes and the motion of water is actually the presence of rivers – like the Nile, the Ganges, the Sepik, the Amazon – the presence of the lake … of the sea … and of the Venetian Lagoon … The Lagoon is one of my prime spaces to “sink” into the element of water.

Notes from September 30, 2013: the pull of the water … the connectivity with the seas … the information-inspiration that the water brings from the sea and rivers AND is exchanging over the water … AND not to forget that we are also water… but … here in Venice, in MY world, I started to recognize that the living being of the Lagoon water is actually dead, or at least very sick … this fact did not get into my living consciousness so easy … what is happening with me, as water self, while touching the water of the Lagoon… the basic relation with the underwater – the very source of life – is hardly connected to the elemental water, perceived as a life structure or intelligence, co-creating information and instantly passing them to the “almighty waters”. Water can carry countless information. Water transforms/regenerates very quickly. Water exists within and around us practically everywhere … water makes love each day with trillions and millions of sunbeams – beings from the sun – millions per second in one droplet … all of us, in fact all matter, contains water, with very small exceptions such as diamonds. Our connectedness – ONENESS – is physically manifested through water, which can transfer the information practically through everything, including the atmosphere, the soil … Everything contains water! We are water – the essence of life – and water in its sub molecular form “contains fire” and evaporation is a constantly present process. Now, in 2013, the Venetian Lagoon did not let me overlook itself, the very being – Lagoon, which lives in its space/canals, in the area of 550 km2. The Lagoon is constantly moving water. The sea moves in, in a strong current, six hours in and six hours out… and from the land, three rivers are blending in. The Lagoon is like a river, a natural complex being, continuously inspiring and feeding. The pattern, the current, the information that accumulates, transforms, dissolves, shares with the surrounding life, is actually the essence of what I mean by river, lake, sea, lagoon, stream … Venice was a republic for 1000 years (726–1797), and for 700 years, every year the Doge performed the most important ritual, “marriage with the sea”, a marriage of the Venetian Republic with the mighty living waters of the (Mediterranean) sea … by giving a golden ring to the sea. Here in the Lagoon, through communication with the water, as well as with Ivana Petan, who gave me the awareness of the air, I became aware of the complex being-living presence of the Venice Lagoon, which I named The Water Dragon of Venice.

project /concept and photography/ by : Bojan Brecelj in collaboration with Marko Pogačnik and Ivana Petan