There is a dance going on! 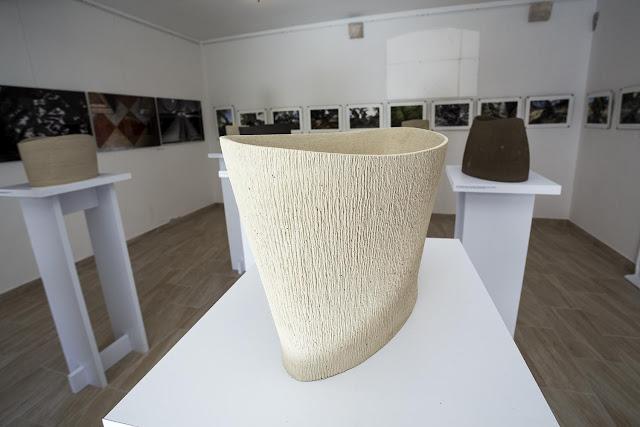 After the opening on 22 of July 2017, the Adriatic-Mediterranean space – between Venice and the Ionian Islands, the world that used to be in my conscious very much apart, started to resonate as more connected and related space… 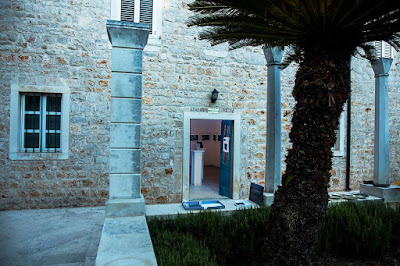 Gallery Stratiko /court of Dominican MonasteryIt is about the exhibition of photos and ceramics in Gallery Stratiko in Dominican Monastery, in town Paise or Faros or officially Stari Grad on Hvar Island with all its recordings of creative movement in space and time embodied in photos and ceramic pieces. It manifests a space, resonating between Venice and Ionian Island as connected space, passing the information through movements of water, air and subtle realms of new spaces/elements that can be touched… embodied in ceramic pieces. 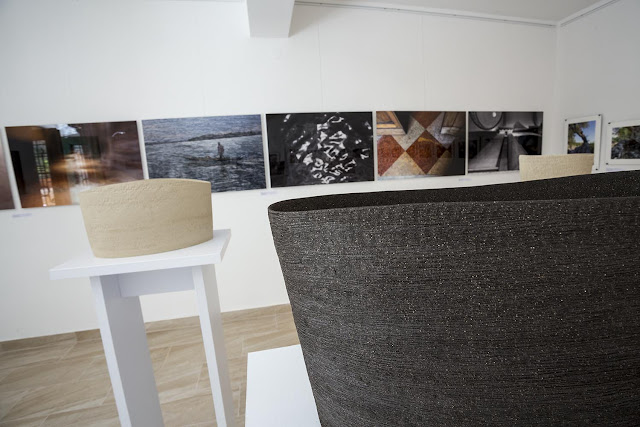 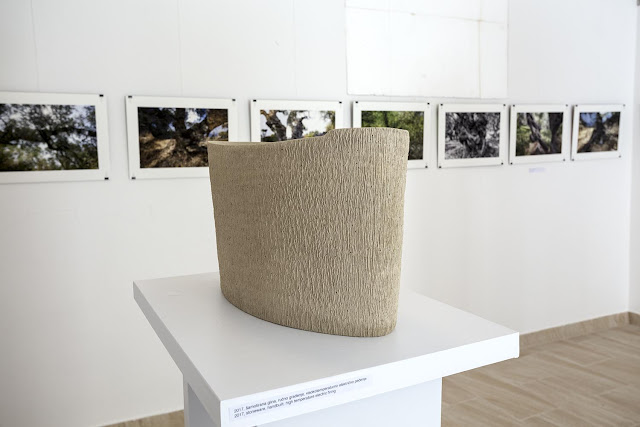 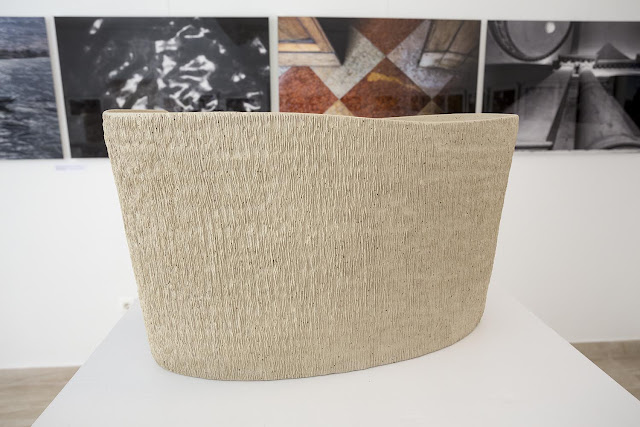 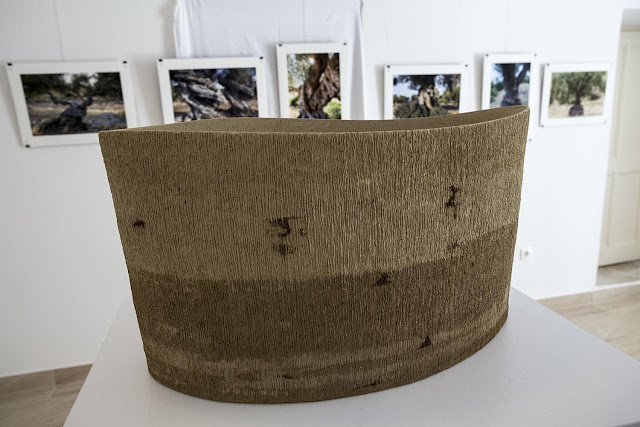 There are three elements in this exhibition. They are reflecting the tuning into the qualities of this part of the world, (in)dependent from the past, as here and now. More precise, installation/exhibition is actually reflecting the worlds of Bojan and Ivana, their dialogue with Adriatic Mediterranean space, as well as the resonance between themselves. 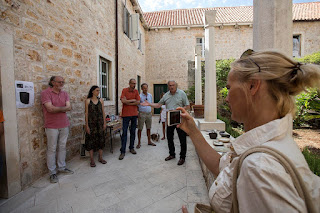 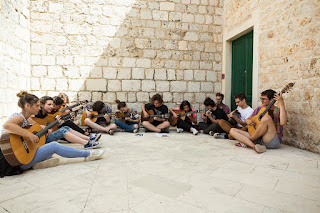 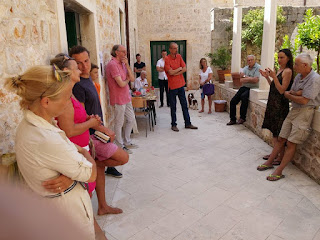 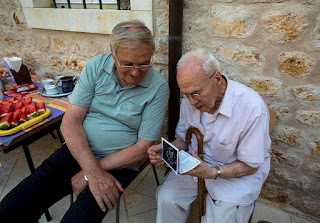 There were actually two openings going on, the morning one for the morning people, and the evening one with the concert and special wine from Matko Zagalo /his story is published by MED Land Project / 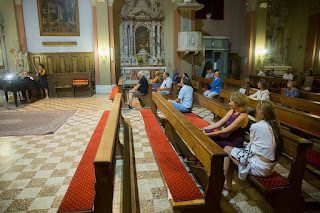 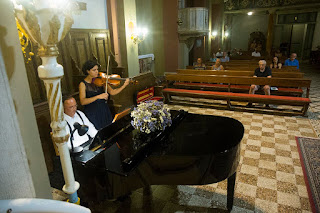 the concert was held by Jelena and Tomislav. /Jelena story is published by MED Land Project / 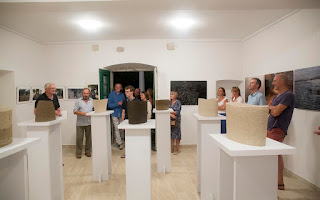 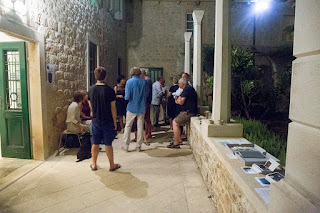 The name of this exhibition/installation is Dance with Mary.Mary stands for the goddess of life that has three aspects, or three parts in her life cycle: white /as the innocent and bursting one/, red /as the ripe and creative period/, and black /as death and transformation/.In this installation, the third aspect of black Mary is prevailing. There is lot of movement present in the images as well as in the ceramic pieces. It is a record of a dance with the Water Dragons in Venice Lagoon, then, on the other side, with Olive Trees on Greek Ionian Islands, and with the elements in the vast space in-between, recorded in ceramic objects.Energy, created at the exhibition/installation, which emerges especially through visitors’ conscious observing of the “dance” in the images, in the pots. There is opening an awareness of the Adriatic Mediterranean space, that its distant points are every moment related. PS: dance evokes in me the connectedness in the space and time, let’s dance 🙂 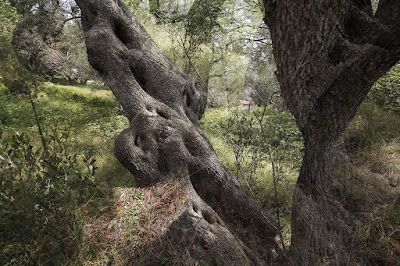 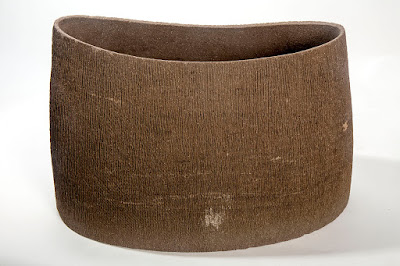 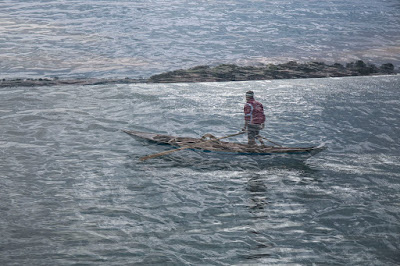 Photos are done in the lagoon of Venice and are part of the series Water Dragon of Venice project – limited edition 5, Digital print, lace mounting on acrylic glass, is available in three formats /101x67cm, 62x45cm, 45 x30 cm / at GALERIJA FOTOGRAFIJA in  Ljubljana, Slovenia:https://galerijafotografija.si. 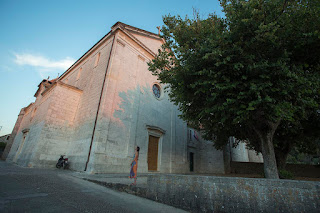 …and probably you do not know that in Dominican Monastery in Stari Grad lives one priest that also paints and writes, Fra Mario started a new chapter in the monastery, gallery and accommodation for quests like literates and people that are seeking contemplative environment. Monastery keeps also rear book examples in the renovated library.

More about the exhibition :

From there, sailing across the Mediterranean, in the straight line towards the north, you land in the Venetian Lagoon, and sailing towards the south, in the same distance, you land on the first Ionian island Othonoi, where in the Kalypso Cave Odysseus lived with 50 nymphs for 20 years.MED Land project – photo project dealing with the Mediterranean identity – was born in Venice and acquired its first real shape in the land of Faros, which is at least 800 years older than Venice. The project is in progress, currently moving around the Ionian Islands.The exhibition weaves its way through three contents. Venice Lagoon, as the pre-source creative space, through water and primal forces (dragons), constantly stays connected with the rest of the Mediterranean, with all seas, waters…; with the Ionian Islands, that are deeply rooted in the constantly moving geological crack, going down 4000 meters under sea level. The Ionian Islands are full of olive trees! Since centuries, millennia, some of them from the time when the Greeks landed in the Faros bay. They dance their dance, woven from the stream of life, from the lightest breath to gigantic dimensions of Earth that move among the stars. They dance their creative dance through which the Earth’s cyclical and primordial wisdom is expressed in the flow of constant changes. Olive trees are the power and wisdom of this space. People of Ionian Islands are strongly connected with them; olive trees are that part of the family that never dies. The third or the first content of the exhibition I perceive as the miracle, created by ceramist Ivana Petan, here in Stari Grad for the second time. Her ceramic artworks are connecting me with a new place, a new element in which life develops; life waters connect and transfuses in a different way than “usual”. My perception of it is as something between the element of the earth and the element of the air. The easiest way for me to experience it is in the middle of the sea. Space there is freer and more contemplative.The exhibited sculptures of Ivana Petan I perceive as central and all encompassing, embracing the space between the Ionian Islands and the Venetian Lagoon, and at the same time, they speak of something that is present throughout the planet.Bojan BreceljBy hand, I’m building a certain and definite shape, a new space, in my mind still completely uncertain and undefined. My way of creating is often like this. I do not know where this shape will take me this time, it hovers in the conscious, not in my head, but in my hands that follow the intuition. Focused, I let myself be lead by the unknown. It is a relationship without words, a tactile relationship. Walking home, filled with a questioning feeling regarding my emerging work. Does harmony really live only in strict symmetry? Curious and confident, day by day, despite still rationally unknown and being born only in the moments of creation, I continue this path, mostly choosing recycled stoneware, which makes the color of the finished work a surprise, measuring the length of the work that fits my kiln’s width, coiling one piece of the stoneware on the other, shaping for hours and hours. Almost at the end of the work, the assured feeling of “this is it” is missing. I still question myself should I still reshape a bit up, down…or leave it like this? The mind hardly stays quiet. I aim to touch the right finish, perhaps I cannot reach it? And then, suddenly, there comes a decision “the end!”, which could have easily in some other moment be just one more pause in reshaping? Ivana Petan

People from all over the world visited the exhibition…The good reason is that in the same place -Dominican monastery in Stari Grad has also a Museum which is a popular stop for visitors to Hvar island.

At the very opening, actually, two openings in the same day Vinko Srhoj– professor at University of Zadar (Art of the 20th and 21st Centuries, Theory of Art, The Art of New Media, Art in the mirror of quotation – the mirror structure) was present. Vinko is also known for his critical texts about art, that were regularly published in scientific and popular publications. He wrote also his review about this exhibition! I like it very much and I wish to share it with you. If you do not read Croatian use google translate? 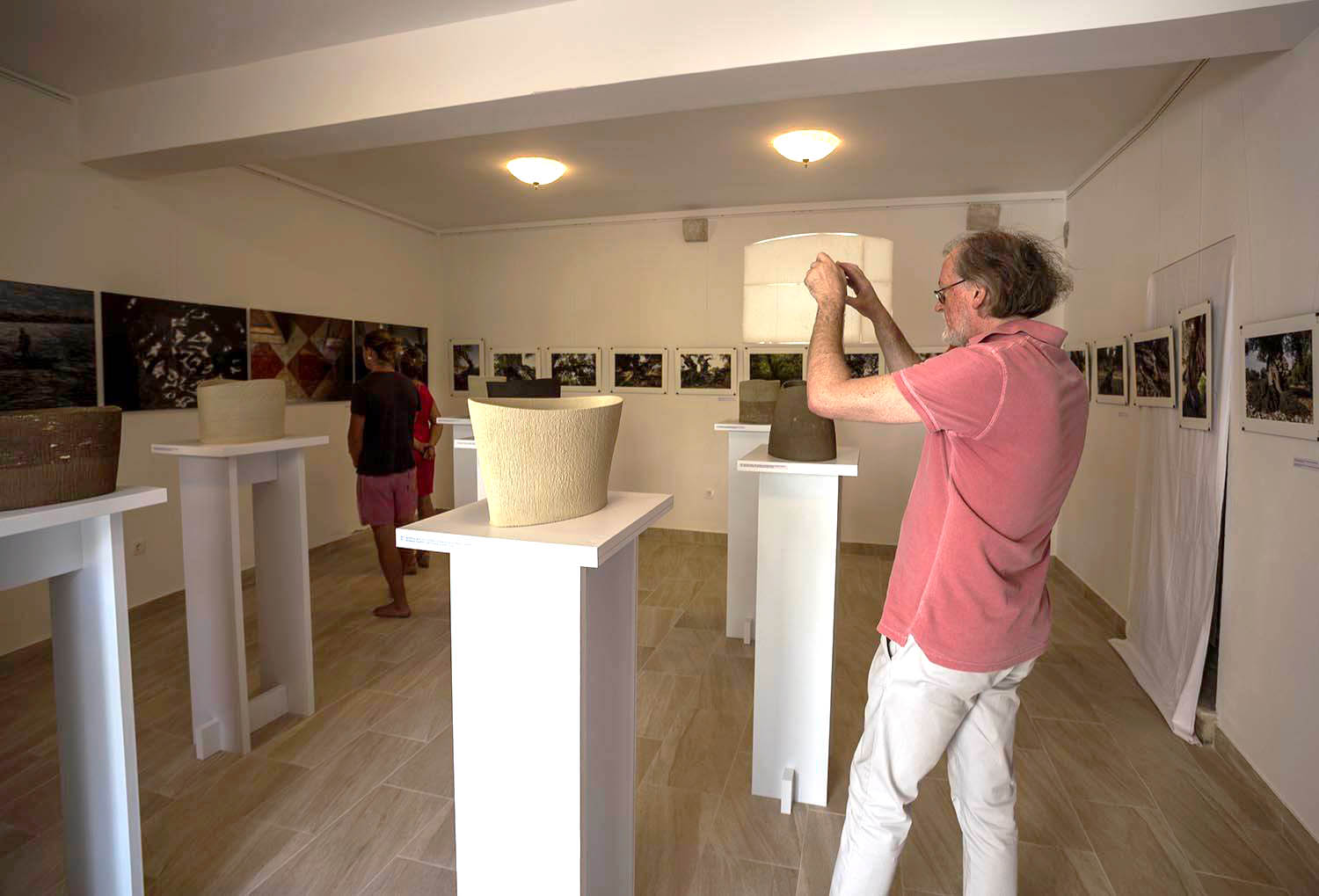 Vinko Srhoj at the opening. 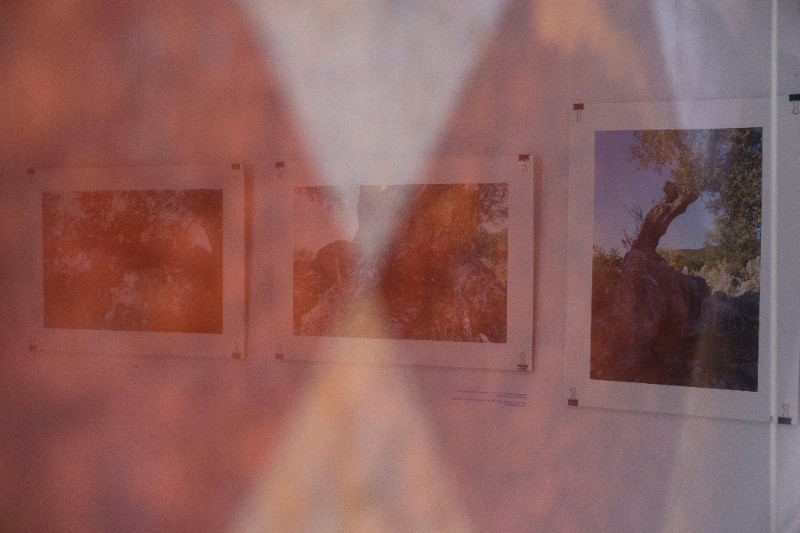 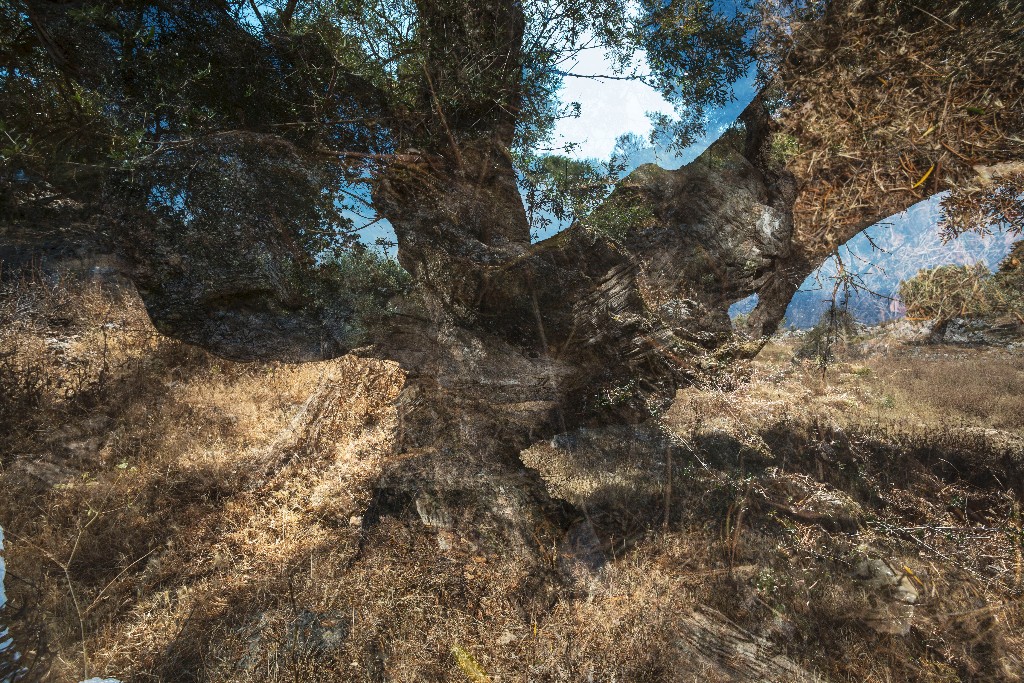 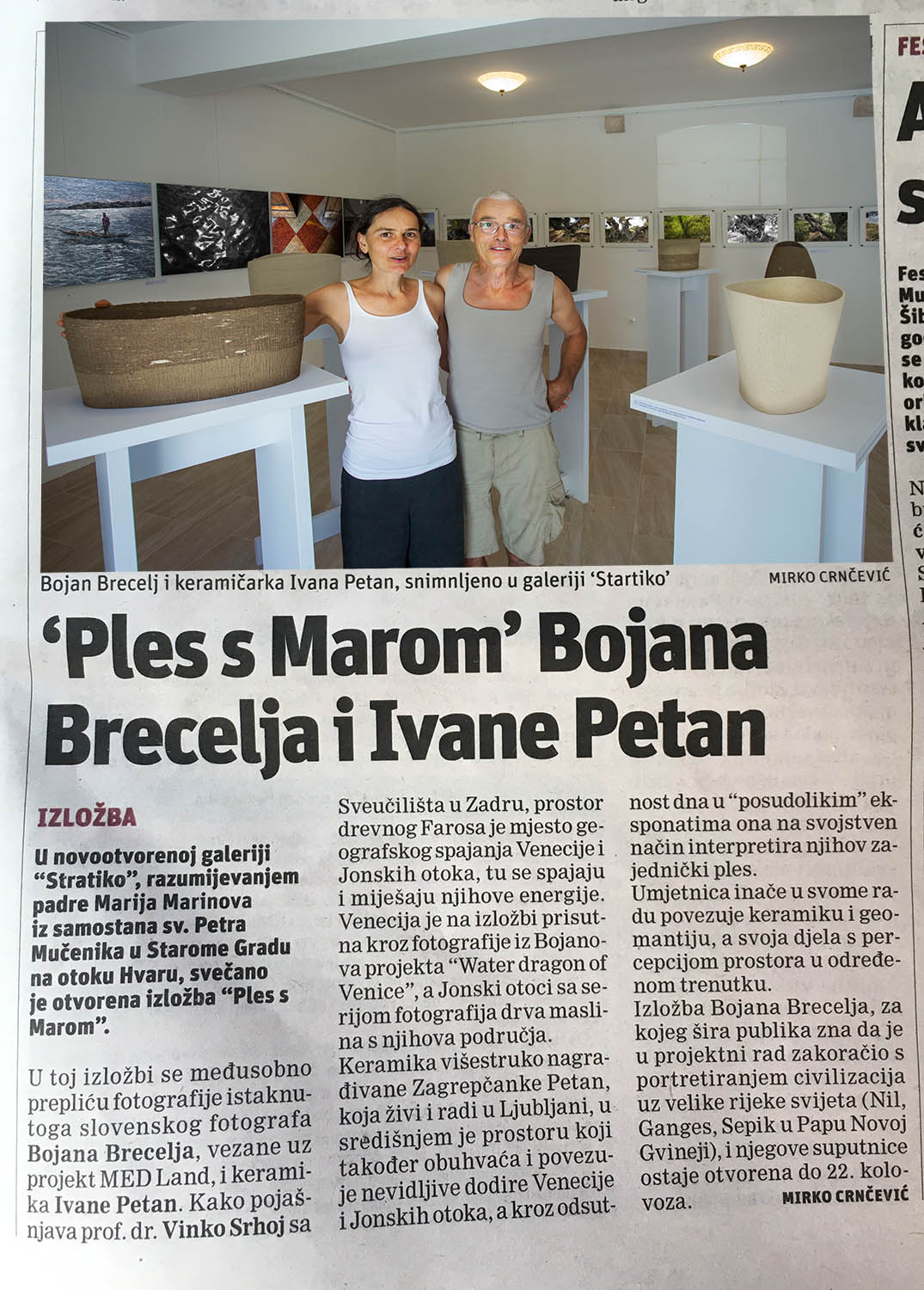 Vinko Srhoj text was a reference and quoted in Slobodna Dalmacija newspaper in an article about the exhibition. Read press release.